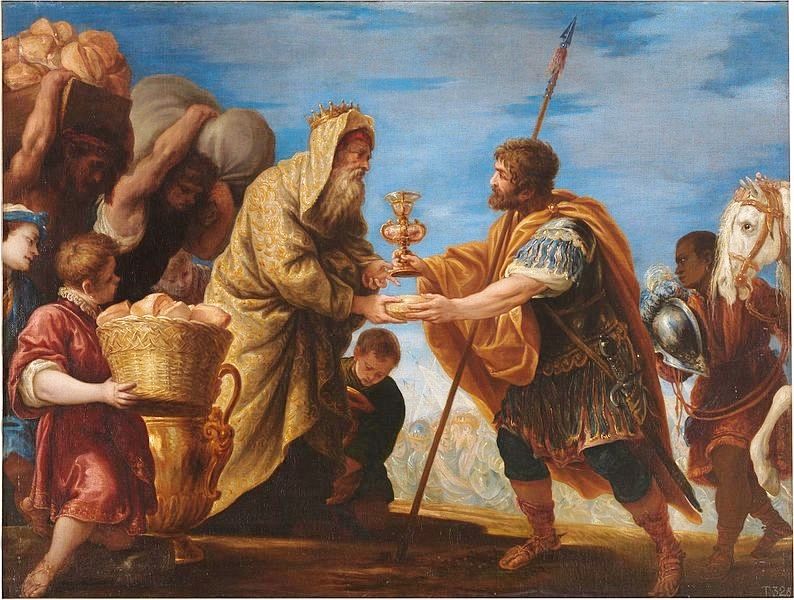 Home >> Articles " antithesis" >> Can Yeshua/Jezus be “the King of Israel”?

Jeconiah/Coniah is one and the same as Jehoiachin mentioned in 2 Kings 24:6-16.
Verse 17 of this chapter says that the king of Babylonia crowned the uncle of Jehoiachin, whose name was Mattaniah, instead of him and changed his name into Zedekiah. But his sons (i.e. the sons of Zedekiah) were all killed. We can read this in Jeremiah 39:6 and in 2 Kings 25:7.
So, Jehoiachin was reconned “childless” by our God and Zedekiah his sons were killed … this would mean that the line David – Solomon is closed to be king. Unless there is another son who has the right to claim the throne. This son has to have a mother who is born from the tribe of Judah.
If we take the promise of יהוה, our God, into memories – the promise that someone’s kingdom will not be removed from him – we’ll remember that this was spoken to David concerning his zera (descendant = singular) and not specific about his son Solomon and his descendants (= plural). And God’s promise about a scepter which will not be taken from until Shiloh comes, is spoken over Judah.

We can read in 2 Samuel 7:14 that when David’s son goes astray, he will be chastened by our God with the rod of men and with the stripes of the sons of Adam. We know what the iniquities of Solomon where. He went after other gods and built temples/palaces for them. In verse 15 of 2 Samuel we read that our God will not take away His Chesed [charity; kindness; mercy] from him, despite of his iniquities, like He did to Saul. And our God did not, because the punishment happened after Solomon. However, we have to find another zera of king David who will sit on his throne ad-olam [eternally].

The Shoresh [root/stump] of Yishai [Jesse]

Yishai/Jesse is the father of king David. He had offspring through David who were sitting on the throne. They were kings of ‘great’ Israel and of the smaller, southern kingdom Yehuda/Judea. In the prophesy of Ezekiel 17 we read that the tree – cedar – is a symbolism for kingship. So, Jesse’s cedar must have been a huge tree. Unfortunately, this tree was cut down by the line of Coniah, but not before a cutting was taken from it!

Ezekiel 17:22-24
So says the Lord [Adonai] God [YHWH] : And I Myself will take from the lofty top of the cedar, and I will place [it]; I will crop off from the topmost of its young twigs a tender one, and I Myself will plant it upon a high and lofty mountain. In the mountain of the height of Israel I will plant it, and it will bear boughs and bring forth fruit and become a sturdy cedar, and under it shall dwell all birds of every feather; in the shade of the branches thereof shall they dwell. And all the trees of the field will recognize that I, the Lord [YHWH], have lowered the high tree, have raised aloft the low tree; that I have dried up the green tree, and have made the dry tree blossom. I, the Lord [YHWH], have spoken, and I will accomplish it."
From: Chabad.org/library/bible